Armed Forces Day to return to Victoria Park this June

St Helens Borough will pay tribute to the local Armed Forces community this June at a special event in Victoria Park, Windle. 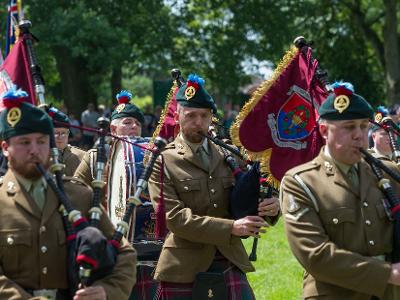 Members of the public, community groups and families are invited to come along to the borough’s green flag award-winning park in Windle for St Helens Armed Forces Day which involves a packed programme of entertainment.

The free event – organised by St Helens Borough Council – returns for the first time since 2019 and features a parade; 69-field gun WWII artillery display; performances from 103 Regiment Lancashire Artillery Pipe and Drum and Royal Marine Association Corps of Drum – as well as an exhibition and memorial to commemorate the Falkland’s 40th anniversary.

Other attractions on the day include current and vintage military vehicles; stalls; funfair; classic cars, as well as variety of performers at the bandstand, including ‘The Golden Age Songbird, and St Helens Music Service music ensembles.

“Throughout history, our borough has been – and still is – home to some truly remarkable figures who have served their country impeccably in various conflicts; from the St Helens Pals of the First World War to Colonel Andy Reid whose work with veterans and people with disabilities has been recognised at a national level.

“This day is about showing our appreciation to people like them who have given their all for our freedom and safety – and salute the fantastic local organisations that provide vital support for veterans and their families.

“It’s the first time we’ve been able to hold an event for Armed Forces Day since the start of Covid, so this year’s event will be extra special, especially given the role the Armed Forces have played in pandemic, such as setting up hospitals and mass testing sites.

“If the weather is like anything we’ve had previously – it’s sure to be a great day.”

“Being part of the Armed Forces is a lot more than just fighting in wars – its dealing with emergencies like flooding, power outages and of course, supporting the NHS in times of crisis like we’ve seen during the coronavirus pandemic- so Armed Forces Day is a chance for the public to come out and thank the forces for what they’ve done and to look at the future.

“There’s a lot to be thankful for and a lot to look forward to.”

In 2012, St Helens Borough Council signed the Armed Forces Covenant and works closely with local regiments, charities, health, housing, education, and employment partners to ensure the Armed Forces community receive the support and recognition they are entitled to.

To find what support is available in St Helens Borough for members of the Armed Forces, visit www.sthelens.gov.uk/armedforces.